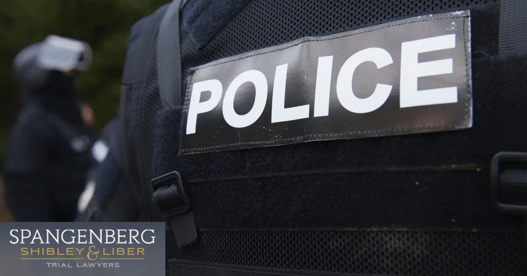 Over the years, countless situations have resulted in the use of excessive force by police officers and others in a position of power. Lately there more and more instances are coming into the national spotlight.

At Spangenberg Shibley & Liber LLP, we have a long tradition of holding law enforcement accountable in the civil justice system and stand ready to help victims of police misconduct pursue justice and compensation.

If you are the victim of police misconduct and need legal representation for a civil case, give our team a call today at (216) 600-0114.

Past Cases of Note

Police misconduct is a serious problem. The list of names killed by officers under troubling circumstances include George Floyd, Freddie Gray, Michael Brown, Eric Garner, Philando Castile, Breonna Taylor and many more. Years before the Freddie Gray cell phone video footage sparked a movement, our firm represented the Estate and family of Robert Richardson, a 28 year-old father who, while in the midst of a medical episode in a county jail, was held down on his stomach with his hands cuffed behind his back by several corrections officers for 22 minutes before he died. Robert was in jail temporarily for previously failing to appear at a hearing in juvenile court.

Creating a Standard for Public Safety

Lawsuits against officers unquestionably help and are important in helping to shape a safer standard of policing and use of force against members of the community. Indeed, for those cases that survive initial challenges a jury in a civil courtroom gets to decide what is and what is not reasonable force in any given case.

Imposing consequences on law enforcement and the communities who employ them through lawsuits seeking to hold wrongdoers accountable helps to deter misconduct at every level.

By coming forward when you experience police misconduct, you’re standing up for yourself and your rights, but also helping others potentially from experiencing a similar situation.

While there are many good officers and there are situations that arise in which more force is needed, in situations where it’s unnecessary, accountability is vital to protect individuals from experiencing this same problem in the future.

By holding law enforcement officers accountable, we as a community send a message that their actions outside of the normal scope of the law will not be tolerated. It helps to dictate the culture of policing to deter those officers that may act outside the bounds of the Constitution.

What You Can Do to Protect Your Rights

Over the years, exposing police misconduct has become easier as everyone has camera phones and can record interactions. However, there are situations where video evidence doesn’t exist, and misconduct goes unreported.

If you’re ever in a situation where you face possible police misconduct, it’s vital to make sure you speak out. If you can document your encounter without making it hostile, this can help as well. You want to make sure, though, that you’re not keeping quiet about the situation.

If you don’t speak out, the actions of an officer go unpunished, and they may feel as though they can do whatever they want without consequence. You are left to deal with the aftermath on your own with no clear help to move forward.

When you speak out against misconduct, you’re exercising your constitutional rights and seeking to protect and enforce those rights.

Remember, police misconduct comes in many forms, including:

Police officers have a difficult job and so many officers are dedicated well-intentioned men and women who are and should be held in the highest regard. Some, however, fail to uphold that standard and still others make indefensible decisions in any given situation.

The moment misconduct arises, you want to be sure you have your rights protected. Speaking with a civil rights lawyer who can explain what options you have can give you a clear understanding of what comes next.

At Spangenberg Shibley & Liber LLP, we make it our top priority to safeguard your rights after police misconduct. From start to finish, we are tough, knowledgeable, and dogged in holding law enforcement officers and other individuals accountable when they violate a citizen’s constitutional rights. We have earned a strong reputation representing clients throughout the nation and Ohio because we truly care about stopping injustices. Nick DiCello, a partner at Spangenberg, has twice been voted by his peers as Layer of the Year in the field of civil rights, including for 2021.

We encourage you to call our firm at (216) 600-0114 to discuss your potential case today. We offer free consultations, so you can get a better idea of your rights and options moving forward.